Let’s face it: There are a lot of kids who are picky eaters in the U.S. They refuse what’s served to them unless it’s pizza or macaroni and cheese. They turn their noises up at anything remotely resembling a vegetable. And they pout until you give them something they like.

And guess what? It can happen to you, too. Seemingly overnight your little one can go from being a sampler-of-everything to the world’s worst eater (read: sugar or junk-food addict).

But teach your kids to eat the French way and you might avoid the picky-eater problem altogether, says Pamela Druckerman – an American author who lived in France.

In her book, Bringing Up Bébé: One American Mother Discovers the Wisdom of French Parenting, she describes the principles French parents follow to raise kids that would rather eat a braised leek than a chicken nugget:

When it’s time to start solid foods (at six months old), French babies don’t eat bland foods like rice cereal – a typical first food in the U.S. Instead, they are served a variety of veggies. The most common ones are steamed and pureed green beans, spinach, carrots, peeled zucchini and the white part of leeks.

French parents also model a positive attitude about eating vegetables. They consider vegetable dishes something to be savored, not just an afterthought served on the side.

French moms and dads believe that it’s their parental duty to introduce their children to a wide range of flavors. In addition to developing a taste for different flavors, they also encourage their offspring to appreciate the smell, taste and texture of each food they eat. They prepare each meal in courses and with presentation in mind. If the plate looks boring, they add color with a bit of tomato or avocado.

French parents don’t give in to picky eaters.

If a child doesn’t like something, that’s fine. For now.  But that food will show up on their plate again in another form. French parents don’t crumple in the face of a picky eater. They persist.

Foods are served time and again, in different pairings and cooked different ways until a child gets used to it. If a toddler refuses to eat, a French mom might ask him to smell the food or to just give it one taste. And, she doesn’t offer any substitutes for what’s been served.

Processed food is a no-no.

Fresh food is the norm in France. Instead of crackers, Cheerios or fruit leather for a snack, a French child noshes baguettes, cheese, fruits and vegetables.

Kids eat on a schedule.

The afternoon snack is the only snack children are given. Because they don’t snack throughout the day and meals are spaced pretty far apart, they arrive at the table hungry.

Meals are served in courses.

When kids arrive hungry at the table, the first thing they are usually given – as an appetizer or first course – is fruit at breakfast or vegetables at lunch or dinner. Giving the healthiest foods first is genius! Hunger puts the brakes on pickiness making kids more open to trying new foods.

There are no children’s menus.

Most restaurants in France do not have children’s menus. Kids are expected to eat the same types of meals as adults.

Chocolate milk is often served for breakfast with fruit and a baguette. It’s also typical for kids to have a dessert during lunch or as an afternoon snack. In fact, a common afternoon snack for children in France is a chocolate sandwich: a bar of chocolate wedged in a baguette. Because kids can count on getting a sugar fix every day, they aren’t as likely to beg for treats.

The book is packed with other great tips too including:

Besides learning some new parenting tricks, Bringing Up Bébé is also a fun read. Druckerman weaves her experiences, interviews and anecdotes so masterfully that the book is a true parenting page-turner. It’s definitely worth a read to see if any of her tips and tricks work for your family. 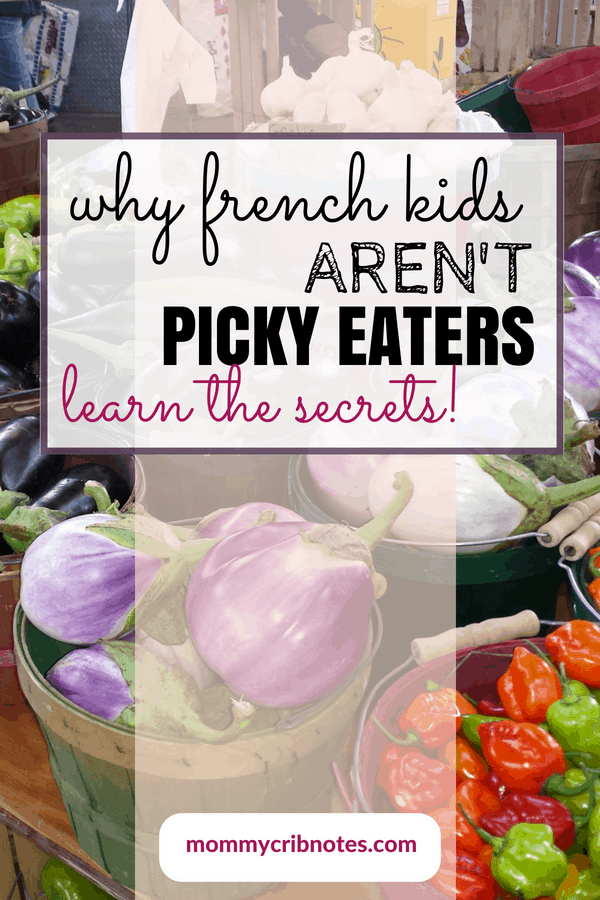 I’m a mom of two kids only 18 months apart. And while my life was crazy hectic for a while, there’s nothing better than being a mom. If you’re just beginning this crazy-amazing trip called parenthood, you’re so in the right place. Here, I share my best tips so you can quickly get the hang of parenting at every stage. Read More…

I’m a mom of two kids only 18 months apart. And while things were pretty hectic for a while, there’s nothing better than being a mom. If you’re just beginning this crazy-amazing trip called parenthood, you’re so in the right place. Here, I share my best tips so you can quickly get the hang of parenting at every stage. Read More…