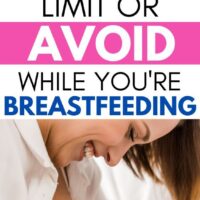 Whether you are getting your ducks in a row or already nursing– You may be wondering which foods you should limit or avoid while breastfeeding to keep your baby safe and healthy.

You definitely want to be mindful of the foods and substances you’re putting into your body when you’re breastfeeding.

There are some foods that all breastfeeding moms should limit (like alcohol and coffee, for example), while others will depend on whether or not your baby has an allergy or intolerance.

Remember, no two babies are exactly the same. While some may have a problem with a certain food, others may not.

So, which foods should you keep a close watch on? Let’s take a closer look.

Related: 15 Reasons Why Your Baby Cries While Nursing

List of foods to limit or avoid while breastfeeding

In the long-term, alcohol may decrease your milk production and this, in turn, can lead to you having a shorter breast feeding duration than you would otherwise have.

Also, alcohol passes through the breast milk and into your infant’s system. According to the CDC, one standard drink per day is not known to cause problems, especially if you wait at least 2 hours before nursing if you have had a drink.

However, excessive alcohol consumption can cause development issues and disturbed sleep patterns.

To clarify, one standard drink usually means a single alcohol shot, 5 ounces of wine, or 12 ounces of beer.

Contrary to popular belief, the pump and dump technique doesn’t work. Your breast milk will continue to contain alcohol until your blood alcohol level returns to normal.

However, this technique can be helpful for relieving any discomfort you may experience from skipping a nursing session. You can also pump and then discard if you are trying to stick to a pumping schedule to keep your supply up.

Lots of nursing mothers love seafood and wonder whether or not it’s ok to eat fish.

The problem with some fish is the mercury, which may be harmful to your little one’s development brain and nervous system.

However, if you have fish with only a tiny amount of mercury, this can actually benefit your little one’s health as well as your own.

There are certain fish which you need to avoid because of their high levels of mercury. These include:

There are also certain fish varieties which are safer for moderate consumption due to their lower levels of mercury. These include:

For a more detailed list, the CDC has a printout you can refer to here.

It’s probably fine to consume some caffeine while you’re nursing, however, you should only have a moderate amount. According to the CDC, it’s safe to have around 2-3 cups of coffee, which is about 300 mg of caffeine.

If you drink more than the recommended amount, this can affect your little one’s sleep patterns and cause them to be more irritable or fussy than usual.

Keep in mind that caffeine can be found in several places other than coffee, including:

You’re fine to enjoy some chocolate occasionally, but it’s probably best to avoid in large amounts on a daily basis.

Chocolate contains theobromine, which is similar to caffeine. Eating a moderate amount of chocolate isn’t likely to cause any issues.

However, it has been suggested that chocolate may cause irritability and jitteriness much like caffeine if a mother consumes large amounts while breastfeeding.

It’s also worth mentioning that a group of dermatologists in Japan have reported that there may be a link between chocolate and infants with atopic dermatitis (also known as eczema).

Of course, you shouldn’t be deprived of all the things that you love. Rather, you should consume them in moderation.

When eaten in large amounts, strong herbs like peppermint, parsley, and safe may have a negative impact on your milk supply.

While these herbs have a rich flavor, they’re anti-galactagogues, meaning they may decrease your milk supply.

If you’ve noticed that your milk supply has reduced after consuming any of these herbs, you could try avoiding them to see if it helps.

Peppermint presents a greater risk than sage and parsley since you can find it everywhere. Even toothpaste or candies with peppermint flavoring could have an effect on your breastmilk supply.

You may also want to avoid using any peppermint essential oils on your skin.

And sitting down and devouring an entire box of Cheez-Its is not going to cause any long-term harm.

But– It’s not giving you a ton of nutrition either. Processed foods are full of empty calories, extra sugar, and sodium.

That’s not going to keep you full and satiated for very long, which could possibly contribute to unwanted weight gain while you’re breastfeeding.

It’s best to focus your efforts on eating a variety of healthy foods so that you’re meeting your body’s increased nutrient demands.

Usually, you won’t have to worry about consuming dairy while breastfeeding.

However, there are rare occasions (about 3%) where an exclusively breastfed baby does have a milk allergy.

If you are concerned your baby may have a milk allergy (or any other allergy), please talk to your pediatrician before making any major changes to your diet.

Here are some signs your baby may have a cow’s milk allergy:

While not technically a food, sometimes decongestants like pseudoephedrine or phenylephrine PE, for example, can interfere with your milk supply.

While it isn’t guaranteed that these medications would affect your milk supply, it’s good to know that’s at least a possibility.

So, if you take these and notice a decline in your supply, you might consider trying a nasal spray instead.

Hopefully this list gives you some insight on which foods to limit or avoid while breastfeeding so that you can keep your little one safe and your mind at ease!

We are not health professionals. We are just moms who like to research and share tips that have worked for us! Always check with your doctor or pediatrician if you have any questions or concerns.