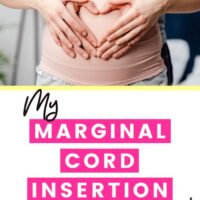 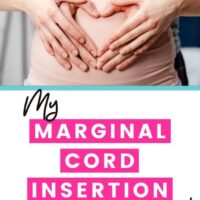 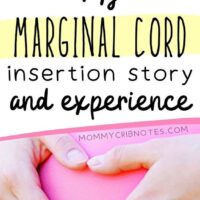 When the phone conversation begins, “We don’t normally call patients with their results because they typically have questions,” you know you’re probably going to get some news you weren’t necessarily expecting.

I got the call on a Tuesday afternoon and the emotions that followed hit me like a freight train despite my efforts to stay calm, trust my doctor, and have faith.

The diagnosis we received following our full anatomy ultrasound was that I potentially had a marginal cord insertion that could adversely affect the baby later in the pregnancy.

The nurse with whom I was speaking assured me that the baby was fine now and that the issue was not a grave threat.

However, later in the pregnancy, we’d have to monitor more closely to ensure that the baby grew appropriately.

I accepted her reassurance and immediately started googling the condition once we got off the phone.

As I googled, I discovered that the information online ranged anywhere from mildly helpful/reassuring to downright terrifying.

With that, I aimed to make it my goal to provide more information to others than I had, should the diagnosis be confirmed.

I was able to return to my regular doctor two weeks later who again reminded me that our baby was healthy at the time and should the diagnosis be confirmed, it would most likely only mean additional monitoring.

She also encouraged us that the issue could potentially be a false diagnosis being that she actually had never treated a patient with a marginal cord insertion diagnosed during gestation.

We scheduled the appointment with the specialist she suggested and felt reassured that the prognosis was good.

The next week we went to the specialist (a high-risk obstetrician) feeling positive about our baby’s health, and the potential that we didn’t really have the condition.

However, after a quick but thorough ultrasound, the specialist confirmed what the original ultrasound suggested.

I indeed did have a marginal cord insertion; however, the cord was solidly implanted and did not look like it would have too great of an effect on the baby’s health.

What is marginal cord insertion?

A marginal cord insertion is a cord abnormality that involves the umbilical cord being inserted on the edge of the placenta rather than in the center.

The specialist explained to me that ideally the cord is located in the center of the placenta; however, there are times when it migrates to a more optimal location for gaining nutrition, which is likely what happened in our case.

He also reassured that the issue is not an immediately threatening condition, yet being that some of the nutrients have a further distance to travel to reach the baby, it could affect the baby’s development, especially in the latter stages of pregnancy.

Like I said, I was actually at relatively low risk for the condition, which in itself is considered uncommon. In fact, research suggests that the condition is most common in women who:

I didn’t fall within these categories; however, this was my first baby, and we were also having a girl– two additional factors that are more commonly seen with the condition.

While we didn’t have much information beyond the basics, our doctors did indicate that a few risk factors do exist in conjunction with marginal cord placement.

Because the cord is not secured in the optimal location, there are a few risks involved, including:

With the potential risks, our doctors felt additional monitoring was the best route of treatment; however, some doctors view it as so minimal an issue they don’t change treatment at all.

In any case, when you’re dealing with any issue that makes pregnancy anything but “typical,” I think it’s best to have all of the information possible.

Knowing exactly what the condition was as well as the associated risk factors helped me come to peace with the condition.

It is still sometimes mind-boggling to me to have received this diagnosis, particularly because checking the umbilical cord insertion is actually not part of a routine ultrasound exam.

When I initially googled the condition itself, I came up short on a lot of fronts, including treatment of the condition.

In fact, many women said that they had received a diagnosis followed by no concurrent treatment plan.

While I understand a marginal cord insertion is a relatively lesser diagnosis when compared to a velamentous cord insertion in which the cord is inserted in the membranes of the placenta, I still felt like the condition merited at least some attention from medical professionals, particularly because it can affect baby’s growth rate.

Thankfully, my doctors felt the same way and put me on a regular regimen of checkups to monitor the baby’s progress.

I also did a bit of research on my own and incorporated some healthy pregnancy practices to make sure my baby had the greatest opportunity to absorb nutrients and grow as possible.

Our plan of action

While some of these “treatment considerations” were not necessarily doctor-prescribed, they are all considered elements of a healthy pregnancy to provide the baby with adequate nutrition and optimal development potential.

In addition to the doctor-prescribed ultrasounds and non-stress tests, these healthy living choices helped my baby grow to be healthy and well upon delivery!

Some doctors may minimize a marginal cord insertion diagnosis; however, there are still things you can do to ensure that you and your baby have a healthy pregnancy and delivery.

A marginal cord insertion was part of my sweet baby’s birth story, and we were blessed to have doctors that helped us understand what it meant as well as encouraged us to continue healthy lifestyle choices to give our baby the best chance at a full gestation period and a safe, healthy delivery.

Pin for later? I’d love for you to share my magical cord insertion experience and story with other moms!

Hi, Thank you so much for sharing this experience for us to read. I am now 24 weeks & was told that I have MCI. Just like the other mommas who have shared their experiences here. I would also like to hear more from you as I myself too is getting worried & terrified of what is going to happen in a couple of weeks of my pregnancy. I’d like to know how was your baby during delivery? Was she in full term & did you have normal delivery? This is also my first pregnancy & I’m having a baby girl & the doctor said that she’s a little bit small which makes me really worry. I’ll be going to see my doctor again in 4 weeks & hoping that I get some good news during the check up. But any info would be much appreciated! I’m looking forward to hearing from you soon.

Thank you for sharing this experience I was just diagnosed with MCI I instantly went to google to get more information! It wasn’t really helpful and YES! Terrifying! But I wanted to know how was baby when you gave birth was it vaginal? Did you go through full term? I still have some worries. I’m 20weeks with a babygirl the doctor told me I shouldn’t worry that everything looked normal and I’m going for every 4weeks check ups to watch babies growth. And that she is measuring normal but on the small side at this point they are just watching baby! If you can contact me at anytime I would love to ask you some questions!

Thank you for writing this! I was diagnosed with this today and I have spiraled out of control with fear and worry. I don’t have any of the risk factors as well. So it’s so scary to receive this diagnosis. I don’t have a treatment plan yet but so thankful for all your tips! I will be taking this post with me to my next appointment.

Thank you so much for sharing! I too am wondering if you gave birth vaginally, I know that is one thing that can be compromised due to this diagnosis! Thank you again for the information, I’m happy to hear all went well!

Thank you so much for sharing your experience! It was comforting to read something positive. I was just diagnosed with this yesterday and am wondering if you went full term, we’re able to deliver naturally, and how you and baby are post-delivery.

We are not health professionals. We are just moms who like to research and share tips that have worked for us! Always check with your doctor or pediatrician if you have any questions or concerns.